I watched the movie “Last Call at the Oasis” last night with famous activist Erin Brockovich. 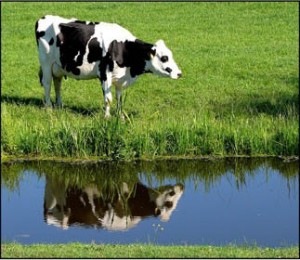 I had no idea it was opening night, I was just passing by the Landmark Sunshine theater on my way home and decided to pop in.  The author of the book “The Ripple Effect”, Alex Prud’homme, was there and gave a quick talk before the movie started and I got a free copy of the soundtrack. Bonus!

Some of the highlights:

I was a little surprised that they discussed the “ripple effect” and the solution to recycling water was to treat waste water – and …. to re-bottle it!

It’s ALL about marketing.  They made their point.  Americans fall prey to marketing, therefore why not have Jack Black drink from the “Porcelain Springs” and everyone else will do it.  It works.  But, if FORTY-FIVE PERCENT of bottled water is currently coming from tap water, why do we even have bottled water?  2 million plastics bottles are consumed in the US every five minutes, causing plastic toxins to be released in our bodies and in our oceans, and in turn, our fish.

Talk about the ripple effect!  I looked for Alex after the film but he had already gone.

Less than 1% of the water in the world is potable, and desalination of salt water is too expensive.  There are already 14,000 desalination plants in the world (wow!).  Are plastic bottles okay because it’s the oceans we are polluting?

Obviously, our drinking water isn’t currently safe, bottled or not – not sure if the title of this article is what bothers me most “Debating How Much Weed Killer Is Safe in Your Water Glass” (What do you mean how much?) or the fact that they called it a “gender bender”.